It seems likely that in the future it will be less likely that you'll need to attend meetings 'in person'... but this promise has been around for a long time without an accepted solution.

Cisco have established a strong presence in the market with their design for a purpose-built room (generically a videoconferencing suite): 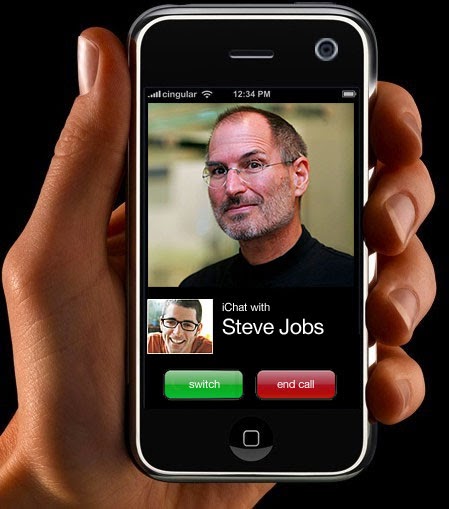 We will see how prevalent the FaceTime application will become when the next iPad arrives (spring 2011?), largely expected to also have a forward-facing camera. Then, if you can't attend a meeting, maybe send your iPad instead? 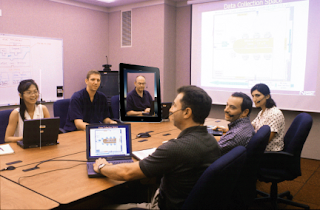 Or if you're not at your desk, just leave your iPad there? 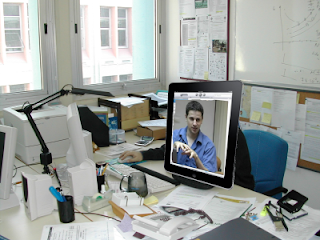 For both of these images, I've done some liberal cut-and-pasting and scaled the iPad up, but you get the idea. Or maybe your remote avatar should be mobile as suggested by Anybot?

Or maybe you'll have a telepresence android?

So there's a range of options there, and we'll see which approach proves to be popular. The fact is that the internet is mostly (in volume terms) used to transmit video, bandwidth is the easiest internet parameter to increase, so this is going to lead to significant developments before long. This particular post is intended to illustrate the 'physical' end of the meeting, e.g. the picture of the guy sitting at his desk so you can walk in there and talk to him. Obviously the 'user' of the telepresence device is sitting somewhere, using some equipment, and this could be the Collaboration Station or something like it. When everyone is using a collaboration station, then these 'physical' versions become less needed.
Posted by Ian Lewis